I last wrote about Egaeus Press back in May last year when I mentioned two of their fine tomes as part of an article about new books and strange tales (here). I was excited to receive an email a couple of months ago stating that they were about to publish several more titles and one in particular caught my eye, Adam S. Cantwell’s collection of short stories & novellas titled Bastards Of The Absolute. I duly put in my pre-order and waited for the book to arrive upon publication which happily was last month.

I’ve waited until now to write about this fine collection as I’ve just started reading it and have found the first few stories to be works of total brilliance in their dark, surreal and unsettlingly odd way. I knew nothing about the author and his work except from the blurb on the Egaeaus website which reads as follows;

“The stories in Adam Cantwell’s Bastards of the Absolute are richly imagined mysteries. They could be fairly equated with the works of Kafka or Borges if their prose were not so luxuriant and surprising at every turn.”

A quote from literary cult figure Thomas Ligotti no less!

The introduction by George Berguño also contains this passage;

“I predict that Adam S. Cantwell’s Bastards of the Absolute is destined to survive the passage of time. I predict also that the book that you, dear reader, are holding in your hands will join the ranks of the classics of strange fiction. Moreover, there are stories in this collection — stories such as ‘Face in the Wall’ and ‘Moon Paths of the Departed’ — which are masterpieces of the genre; stories that are destined to be reprinted time and again.”

Both very strongly worded pieces of praise for this collection of stories and its writer then.

And now to the book itself, it is a beautiful lithographically printed, 256 page sewn hardback with a stunning embossed wraparound cover and printed endpapers which are both by Eduard Wiiralt.

There are also a number of fascinatingly twisted black and white illustrations throughout by Charles Schneider, one of which is included as a postcard with initial copies. 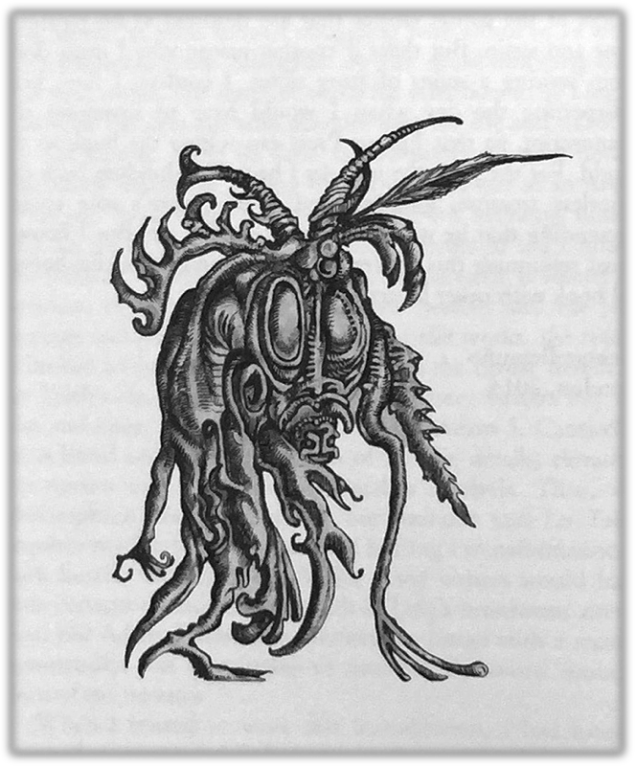 The artwork is absolutely sumptuous and I couldn’t help but feel that this just had to be an outstanding read because it looked so very good. I have not been proved wrong as yet. Egaeus Press are definitely one to watch as their output so far has been of such a high standard that it’s hard to see them succumbing to such vulgar things as the whims of market forces or seeing their quality control slipping any time in the future. Head over to their ‘morbid and fantastical’ website (here) to order a copy of this truly outstanding book but be quick as it is limited to only 250 copies.

8 thoughts on “Bastards Of The Absolute by Adam S. Cantwell Via Egaeus Press”