Today sees me turning over the book I selected for reading last week to find out what lies on the other side; This week’s novel is The Twisted Men by Canadian SF giant A. E. Van Vogt. Strictly speaking this isn’t a novel as such, rather a collection of three unrelated short stories which aren’t really short enough for inclusion in a regular anthology. The book therefore contains The Twisted Men, The Star-Saint and The Earth Killers. The inside cover blurb has the following to say;

A spacecraft returns with the discovery that the solar system is doomed. Nobody believes it, but a handful of people decide to attempt the migration to another star system, just in case. They pin their chances on an experimental star ship called, appropriately, Hope of Man.

That’s just the beginning of a spectacular trio of cosmic adventures and mind challenging concepts, which involve the whole future span of humanity and the length and breadth of the universe.

The Jack Gaughan cover painting shows three very stylised figures in the middle of an asteroid field with their arms raised in a bid to fend off the rocks. I love the way Gaughan has depicted these figures, even to the point of making their helmets look like hoods.

It’s time I dived in and immersed myself in Van Vogt’s triple header, I hope that you enjoyed this week’s cover and will join me again next weekend for another selection. Your thoughts and comments are as always welcome.

The Twisted Men by A. E. Van Vogt
(Serial Number F-253)
This version was published in 1964 by Ace Books
The cover artist is Jack Gaughan 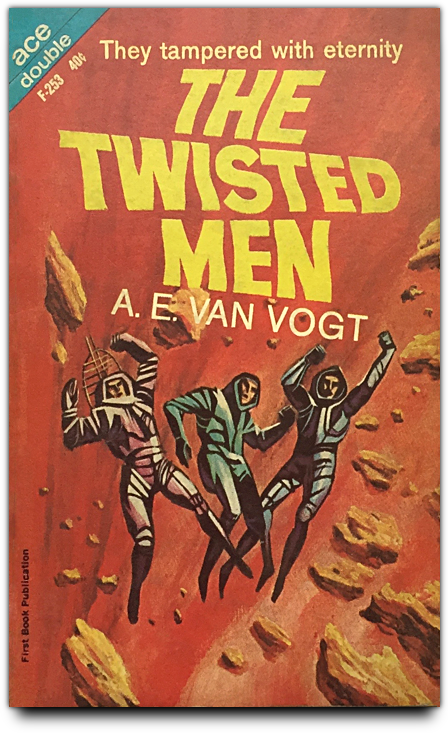 Last week I wrote about books which had progressive, experimentally minded covers (here) and chose ’Shapes And Symbols’ as my opening article on this subject. This week I’m moving deep into the psychedelic underground to present five covers which may well expand your mind, rearrange your chakras and then go and ruin everything by playing a bloody tambourine!

Moonbeast by A. E. van Vogt
This version was published in 1969 by Panther books
The cover artist is uncredited

In the first part of this article (here) I wrote a little about how Digit books was launched in 1956 by Brown Watson Ltd to publish science fiction to cater for a boom in public interest. I then posted half a dozen book covers which all had the humble spaceship as its main design cue. This week, I intend to carry on where I left off and present six more Digit covers which also bear various styles of spacecraft. If you’re enjoying this mini-series then be sure to return next week for more pulpy goodness, your comments are encouraged and always welcome.

The Weapon Makers by A. E. Van Vogt
(Serial Number R454)
This version was published in 1961 by Digit Books
The cover artist is Ed Valigursky 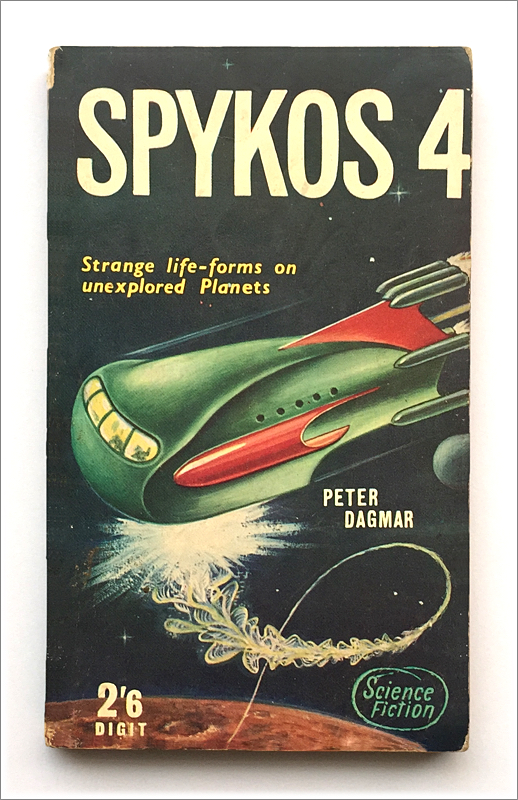 Satellite In Space by Professor A. M. Low
(Serial Number R734)
This version was published in 1963 by Digit Books
The cover artist is uncredited 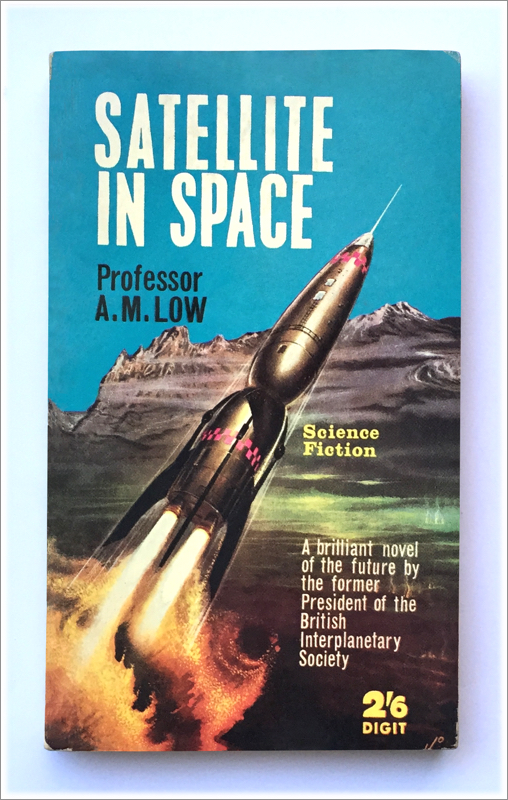 Brown Watson Ltd were a paperback publishing house established in the 1940s and began by issuing mainly westerns and crime thrillers, the mainstays of the pulp fiction market at that time. In the mid 1950s however, the public became fascinated with science fiction and all the new writing that was being produced so Brown Watson Ltd launched the Digit imprint to capitalise on this boom. During its run from 1956 to its eventual closure in 1967, Digit published a veritable mountain of sci-fi books which were loved by the general public and collectors alike. They’re still sought after today, some titles fetching quite large sums of money on the secondhand market.

I’ve always had a thing for cover art as I’m sure you’ll be no doubt aware by now and many of these books did indeed have great covers. My favourites are the ones which take their design cues for spaceships, people etc. from the 1950’s as they brilliantly reflect the stories within. Something worth noting about Digit books is their relative lack of publishing detail, artists are left uncredited and even the year of issue is not printed within. Luckily however, all copies bear a serial number which helps with collecting and identifying individual titles.

My Digit collection has grown somewhat in the last year after many lucky finds on eBay and a little help from friends (thanks Julian). I’ve now decided its time to digitise my Digit covers and share them over several posts, the first few batches of which will be themed.

The theme I’ve decided on for the first two parts is spaceships, mainly because they seem to be so prevalent amongst my collection. There are all manner of shapes and sizes chosen here from the classic cigar-shaped rocket to the flying saucer, its difficult to pick a favourite as I love them all. Which one would you choose though?

And so here then is my first selection of a half dozen books, join me again next week for another helping of these tasty digits.

The House That Stood Still by A. E. Van Vogt
Serial Number – D361
This version was published in 1960 by Digit Books
The cover artist is uncredited

Split Worlds by Tyrone C. Barr
Serial Number – R563
This version was published in 1962 by Digit Books
The cover artist is uncredited 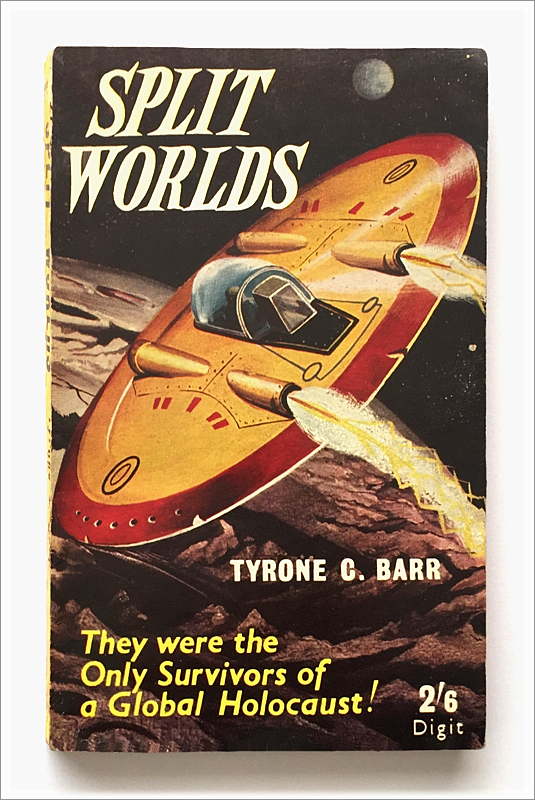 Into The Darkness by A. G. C. Clarke
Serial Number – R550
This version was published in 1961 by Digit Books
The cover artist is uncredited

The Uncharted Planet by V. Ranzetta
Serial Number – R557
This version was published in 1962 by Digit Books
The cover artist is Charles Bril

Sometimes the postie brings me lots of individual packages which flood my hallway enticingly as I descend the stairs for my first cuppa of the day. On other occasions when larger packages won’t fit through the letterbox, she knocks as loudly as a police woman to get my attention – it always works. This morning was one of those situations. I hadn’t felt too good in the night and was taking a cup of tea back to bed when my eternally smiling postwoman rattled loudly at the door. She passed on a single, large package and left smiling to complete her round.

I didn’t open the box straight away as I needed more sleep but later when I did, I couldn’t believe how  ‘in tune’ the half dozen titles inside looked together on the table. I was so amazed by the retro covers that I couldn’t resist quickly writing this article to show you what I mean.

My eternal thanks goes out to the eBay seller (who shall remain anonymous) but I will send him an email of great thanks for this lovely box of top quality retro literature that has completely turned my Tuesday afternoon around.

What do think of the connection here? Drop me a comment and let me know.

That Hideous Strength by C. S. Lewis
This version was published in 1963 by Pan Books
The cover artist is S. R. Boldero

Voyage To Venus by C. S. Lewis
This version was published in 1963 by Pan Books
The cover artist is uncredited, possibly S. R. Boldero

Out Of The Silent Planet by C. S. Lewis
This version was published in 1963 by Pan Books
The cover artist is uncredited, possibly S. R. Boldero

The Changeling by A. E. van Vogt
This version was published in 1969 by Macfadden
The cover artist is Jack Faragasso 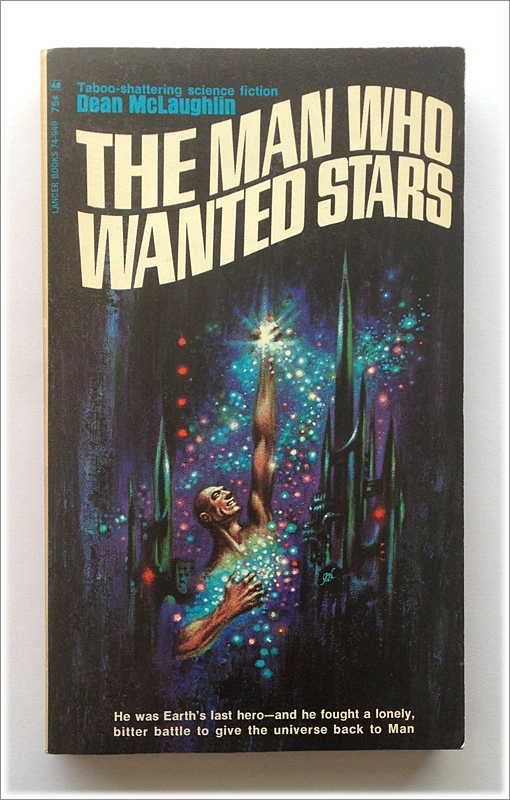 A few weeks ago I published a two part article on the cover artwork of Richard Powers (here and here) and was amazed by the number of books I had on my shelves bearing covers by Powers. I narrowed down my selection ruthlessly for the articles but still had a pile of books left over with stunning cover art. I’ve also had a couple more titles through the post with amazing Powers art and so I decided to post one more article covering the remainder of my original selection plus a few of these newly acquired titles. Here then are a dozen more Richard Powers covers;

3 From Out There edited by Leo Margulies
1960 – Panther 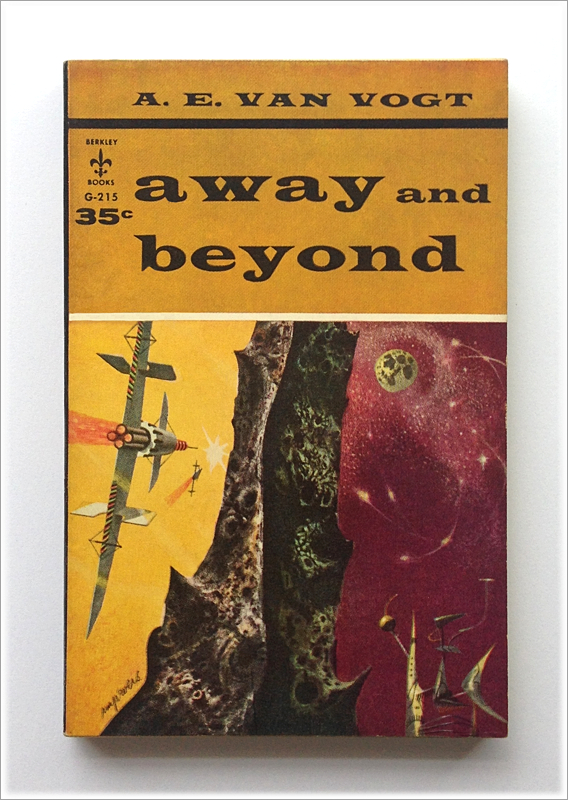 Time Out For Tomorrow by Richard Wilson
1962 – Ballantine Books 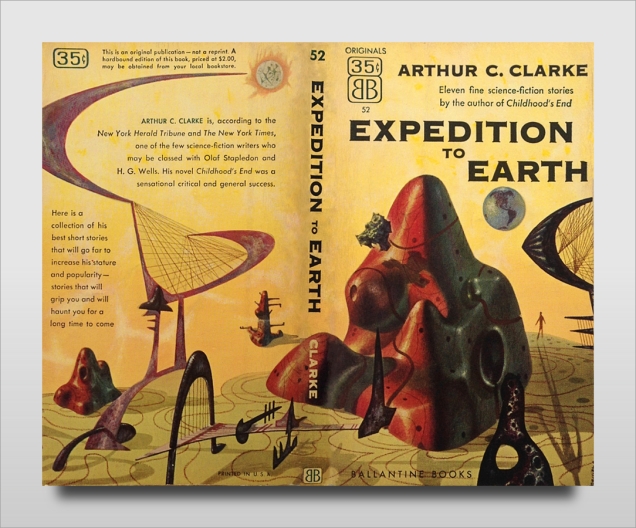 The Reefs Of Earth by R. A. Lafferty
1968 – Berkley Medallion 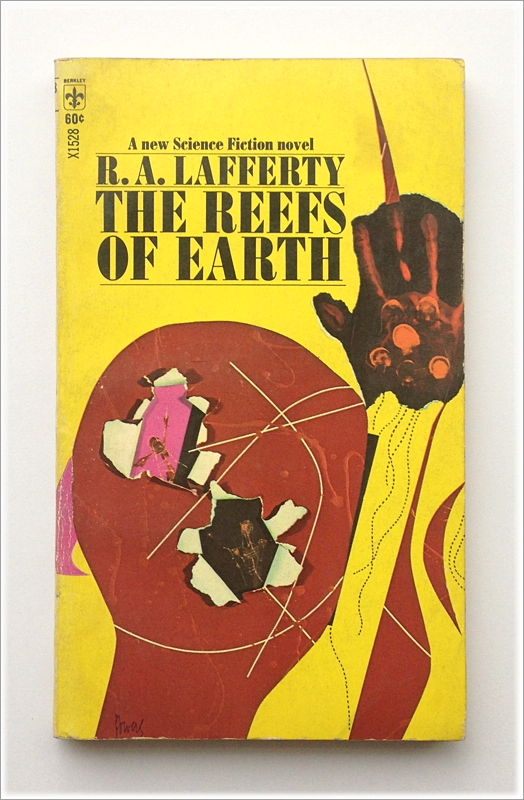 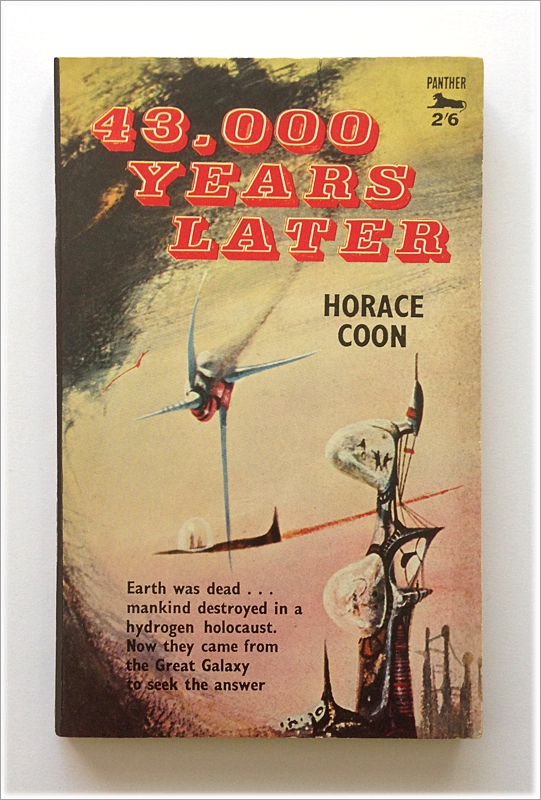 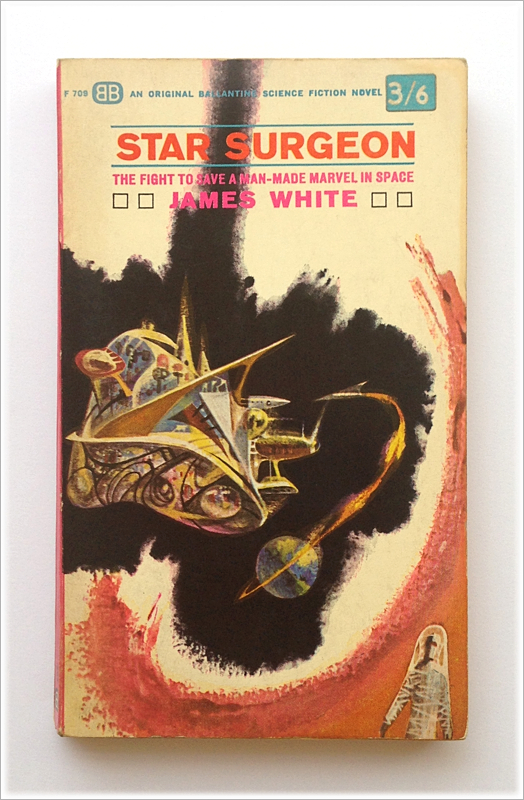